Dear Dave Ridley,
Our Solidary
on your proposed satyagraha.

does this mean an endorsement of the accent and word choices? 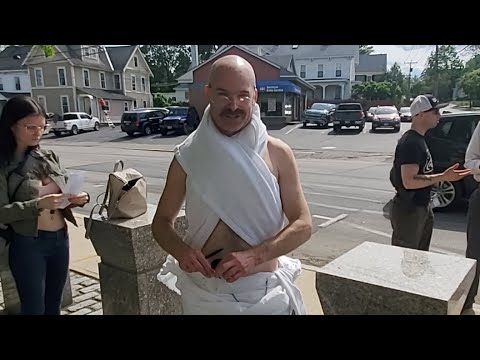 They apparently chose to pretend that there is not a regulation against, and fine for, doing what I did… Although they fined me for it in 2007 and arrested me when I wouldn’t pay. I guess that’s progress! Wouldn’t put it past them to fine me later however.

I would like to offer Bitcoin Gandhi indoor living space for Porcfest at the NHexit spot … from where he can swiftly walk around the campground greeting wellwishers and representing peaceful separation from the Central Government.

Hah hah thanks russell: I’m leaning strongly toward going this year and taking you up on your offer; let’s talk about this more I’ll send you an email or something

Although exhausted and sort of a spent force at the moment i’m wondering if there is something we can do to maintain the momentum of this direction… we have briefly / locally changed the tone of relations between Feds and libertarians in New Hampshire ; is there a way to follow up on that? Would each of you be willing to do something that helps make that happen? 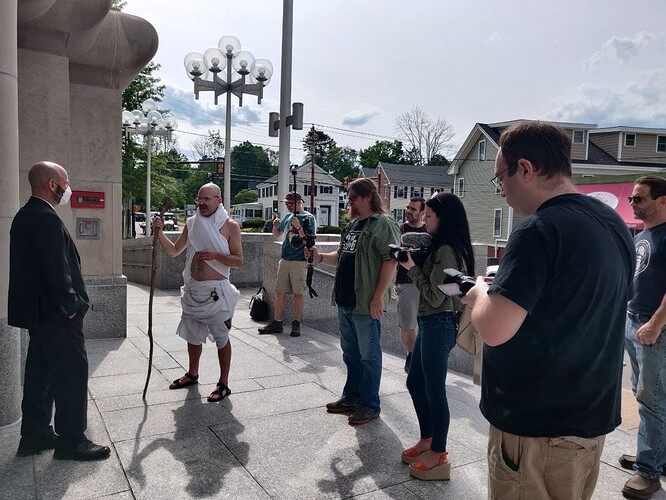 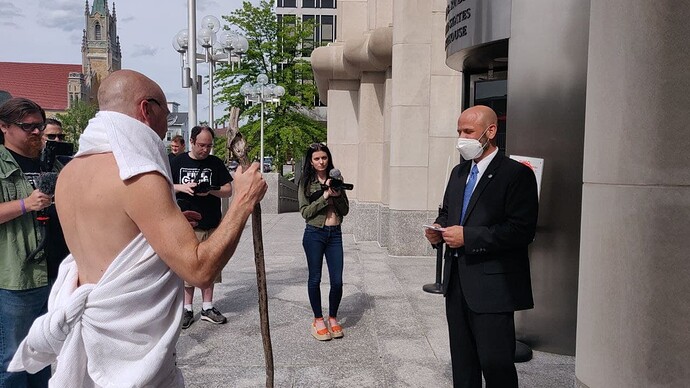 The man in the mask is a U.S. Marshal; in the lower pic he is holding the complaint which I’ve handed him, in violation of Fed reg 102-74, “Distribution of Handbills.” The woman in high heels is Bonnie Kruse; girlfriend of Crypto 6 arrestee Ian Freeman.

This march has given me two maybe-big ideas…how we or I could follow up on this nice moment, where I think we recaptured the spirit of 2007 for a bit and need to make that last.

I keep complaining that free staters seem to spend so much less time on real activism than they do on partying with each other. Maybe this imbalance could be turned into an advantage. What if we started trying to have full blown activist events right after social gatherings…within walking distance?

The other idea I had, which I guess could compliment the one above…is that a weak link in our chain is “support.” We tend to work on our own stuff pretty hard but don’t spend enough time “backing the play of our people.” I’m guilty of this too, although I’ve been good about calling talk radio to make sure the world hears about Porcupine type stuff. Over the coming months I will probably be trying to focus more on other people’s projects and avoid starting so many of my own that I don’t have room to help.

What do you guys think should be done next with this (exhausted) character or with the team that has sprung up around it (and is mostly to be found on Telegram and Facebook)?

I can totally see why you feel it’s exhausted, but remember that if you want the work you’ve done with it so far to last and have an impact, I think you have to keep doing it! Think of it like an actor who might be tired of playing a role, but that doesn’t mean everyone has seen it or been impacted by it yet! I think i’ts premature to let it go. You’re feeling like the character is exhausted because you’re exhausted!

I think going to porcfest as Bitcoin Gandhi is a great idea, and other larger gatherings. You could read a speech similar to what you read just before doing the walk! I think this would be very effective. On the steps of the fed building there you had people ready to listen & respond. (That would also have been a good place to give the speech again.)

except for the jailing me for not paying part lol

Ya srid…the plan was to basially repeat the initial “civil dis notice” at the Fed building…I printed it out then forgot to pack it with me when I left my base camp on June 3. Retrieving it would have meant being late, so we had to wing it.

I’m asking folks what they they would like BTG to do at Porcfest and should probably ask the same thing here! God willing, I’ll be there June 21-27.

Just sent this follow-up email to the U.S. Marshal who headquarters at the Concord Fed bldg.:
It had to go to Juan Cruz’s email addie in CT, since that is the only relevant Fed email addie I’ve been able to find.

Appreciating, as I have, your kind and transparent demeanor toward me and even my ambush-interview camera over the years, reaching out to you in these pivotal times seems appropriate. Credit is due regarding your office’s handling of our pre-announced civil disobedience event at the Concord, NH Fed building on June 2, 2021.

Distributing handbills at your Federal building in violation of Fed reg §102-74.415 could have resulted in one or more arrests. It has in the past here. But when there are over 200,000 pages of “national” rules…the limited freedom we enjoy comes largely from enforcers’ reluctance to impose them all. Restraint, perhaps encouraged by you personally, led to a wise and respected decision not to impose this restriction on civic speech in this case, at this location. On a tiny and vastly more peaceable scale, it’s reminiscent of that moment in “The Grand Tour” where a B-52 veers off course slightly from its nuclear target, resulting in some Soviet bombers doing the same. A series of de-escalatory moves unfolds until the conflict is brought to a quick and mutually beneficial end. We would be wise to attempt something similar.

Arrests or fines at this event would have likely resulted in an escalation in civil disobedience and/or other new peaceable pushback against your government…I was planning it. By not inflicting arrests…and by the appreciated, relatively welcoming demeanor of Dep. Marshal Vidanzy (sp?) as we arrived…you have just veered one of your threatening aircraft slightly away from us and slightly reduced the need for such pushback. Though many orders of magnitude weaker than you or the old Soviets, and though it may not yet be of great significance to your government, it seems appropriate for us to reciprocate in some limited way. I have only some “bully pulpit” influence within New Hampshire’s liberty/independence movement and do not have solid ideas how this would best be done. So it would probably be better to ask you for suggestions of ways that NH libertarians and secessionists could improve relations with your government without compromise of ethics. Considering how little questionable activity our people are engaged in, compared to your government crashing drones through our talk show windows locally while running torture chambers abroad…many will consider a conciliatory outreach of this kind ludicrous. But it is the Gandhian way. Your imperial outpost has done a small conciliatory thing, and now it is our move…whether we approve of your government or not.

We may not take any of them, but we should at least ask: What small step(s) would you like to see NH liberty activists take as a proportional, ameliorative response to Washington’s exercise of restraint toward us on June 2?

Yours with best wishes,

P.S.: Probably have concerns not entirely different from ours, regarding the handling of the NH Bitcoin raids. In keeping with the long-established practice of peaceable change, I would like to invite you to act on those concerns by defecting. Though it seems likely you are a restraining influence on the jittery tendencies of your government, that would simply mean that it does not deserve you. We ask that you join us instead.

added a space before “.net” to keep this questionable forum software from parsing it into a picture.

March may not be over in a sense. Doc says I’ve contracted Erethyma Migrans and/or Lyme. Got a big red spot all the way across my thigh. Other minor symptoms but overall I feel good ; they’ve put me on antibiotics.

Meanwhile I’ve tried to collect people’s suggestions as to what kind of follow-up they think I should do after this minor-success of o march.

Supporters have suggested I:

I’m doing some stuff I wouldn’t normally do, like going to PorcFest and bringing the costume, as a means of maintaining some momentum… I can at least add some “visual” to some people’s events there. I don’t own a car and am still poor Bitcoin price or not (there’s a a Mahatmism that is easy to imitate) so PorcFest is usually a logistical no no. but our OG civil disser Russell Kanning is going to give me a ride and a spot so this year it’s doable… thank you Russell!

Here’s an event at porcfest which has requested Bitcoin Gandhi’s attendance and which I can support by posting it here:
WED June 23
"Join us 2pm Wednesday at site U61 ( Serenity Isle ) for the Crypto6 Fundraiser and Dance Party w/ DJ New Normal and Bartender Bonnie. "

Lastly, a reporter from The Verge dropped by on Monday to interview me here at home, and I"ve been uploading my own videos from the march… at RidleyReport.com. Many police encounters lol. “Holy F-Bomb there’s a guy in a diaper walking a rickshaw down Hwy 9” over and over again. 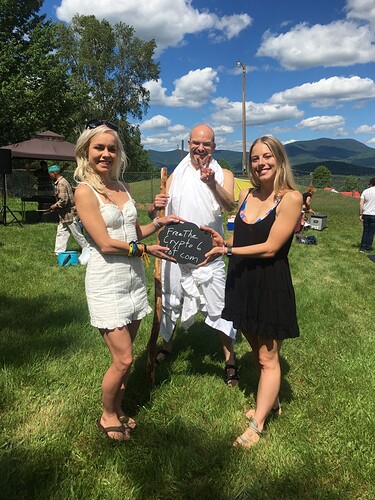 Visit to porcfest…this is a pic from the fundraiser June 23 as mentioned above. The fundraiser was able to collect about 1,000 dollars worth of donations for the crypto 6 and had attendance of roughly 50 peeps. The sign reads “FreeTheCrypto6.com,” assuming that’s what any of you are looking at

Thanks to the Havens (sp?) clan for demanding a selfie with me and emailing me the image!

Sorry for maybe going all hypocondriac here, but I should probably share this message I just posted to telegram…

Public notice… I have an intermittent sore throat which seems to have started yesterday, July 2, five days after leaving Porcfest. No other symptoms. I have been on antibiotics for 2 weeks over possible Lyme rash and my last dose was also July 2. So that indicates I do not have a bacterial infection. I understand there was a COVID case at the Mises site, which I did visit. Attempting to self isolate etc. and inform people I’ve been around closely.

Bitcoin Gandhi should be able to join this event:

Got better. May have just been in my head. Also delivered a speech at porcfest as requested… vid to follow eventually. 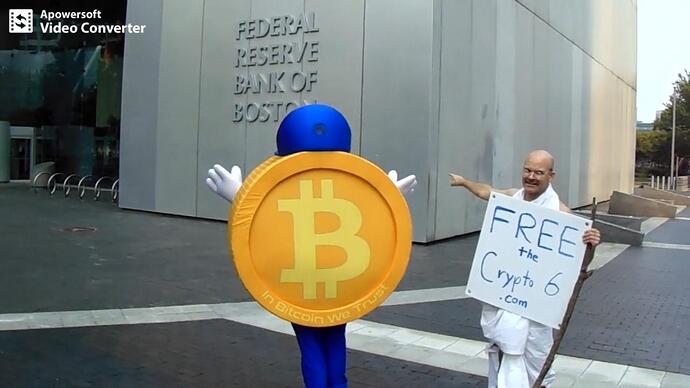 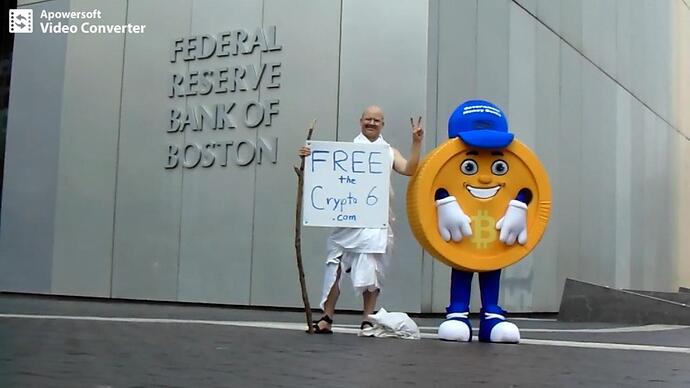 Email to Judge regarding bail hearing and continued detention of Crypto Sixer Rich Paul aka Nobody:
" NH: My raw notes from Rich Paul bail hearing - #3 by Kahnikula "

" The Verge Runs Feature-Length Story About The Crypto Six "