Planning to ride my bicycle to NH

I’m planning to move to NH in June, and I’m doing it in an interesting way… riding my bicycle 1500+mi.
I’m hoping that I can become a regular caller to FTL and talk about my plans, and once I’m on the road, I’ll give daily updates on my progress.

We got another guy doing something similar although not quite as far. I think he’s riding from Keene, NH to NY. He’ll be talking with reporters, handing out DVDs of Derick J’s Victimless Crime Spree video and 101 Reasons Liberty Lives in New Hampshire.

What others have done in the past is called the news media a day or two ahead of arriving in a given town/city and then done interviews with reporters. This helps publicize what your doing and why. You can then talk about the Free State Project, Shire Society, etc. The more publicity we get the more people that more the quicker we can accomplish the objective of a free society.

If you need marketing material we have lots of that and can send you some in advance of your trip. Calling into FTL would also be great! David will be doing that if I’m not mistaken as well.

Excellent - how cool that this is happening virtually simultaneously. We’d love to get updates from you from the road, @Dunker. Be sure to install Skype on your phone so you sound good.

That’s amazing. I wish you luck. Now that’s what you call a biker.

Wow this is awesome!

I really need to get up the nerve to start calling into FTL as soon as possible so I can get “self-promotion” going.

Good plan. Will you be blogging about it somewhere, or just posting updates here, or?

I primarily use dunkerbike.com , there, I have links to my Facebook, Twitter, liberty.me, and Google+.
I just started a Snapchat too.

Oh…I forgot…I have a YouTube where I have over 40 videos showing some of my rides.

Awesome- take video of your journey- of any interviews you do with reporters- etc- maybe you or someone else can utilize it. I’m hoping to edit a video some day. Creating video of the activism I do and whatever else is going on here, etc.

If you haven’t watched Derick J’s Victimless Crime Spree I’d highly recommend it! It’s very inspirational. Maybe too inspirational. I promote the heck out of this on other forums I post at. I feel like there is no better documentary of what is or at least the atmosphere of what is happening in New Hampshire.

540 days in jail for dancing, smoking, going to court, and riding a bike. I almost made it to Daytona Beach (104mi)…maybe I can do better tomorrow.
I had a little trouble with my bike, but, otherwise, it was a pretty great day.

I wanted to call in to the show last night, but I was pretty tired and decided to take a nap.
My “nap” lasted until almost midnight.

That’s pretty darn impressive. I go on some long trips- but not with a bike. This is insane.

I just wanted to congratulate you on doing this and wish you good luck. I signed up for the forum finally because i heard you call into ftl several nights ago. I wanted to offer any advise i could because i have experience in solo self supported rides. in 2007 rode from east dubuque illinois along the mississippi 1300 miles to new orleans with a cannondale touring bike with full pannier bags and a tent in 21 days.

I had been working as a bike delivery guy in new orleans for several years, delivering hot food and groceries in the french quarter by day and riding across town to see friends all night. my friends and i had been wanting to do the ride for a while and had it partially planned. when i moved back to chicagoland, i finally had the ti me to do it, no school or work, no rent to pay yet. so when everybody backed out i just started riding. I didn’t have a s mart phone back then so i used directions from mississippirivertrail.org, a cateye odometer and some maps i made.

I only went about 40-80 miles a day. I think i was traveling heavier than you would be, I also had some cooking gear. I would caution you to listen to and take care your body along the way, it can fall apart past. I rode with a sore or strained knee for a couple days, and started to compensate by using my foot more, or awkwardly. When i arrived in alton, illinois and got off the bike, i could not put any weight on my right leg. I had started overcompensating again, by using my left leg harder and that was starting to hurt too. I was laid up at a campground for 3 days before starting again (with walmart knee and ankle braces). Don’t be afraid to take it easy for a day or 2. That could have easily been the end of my ride.

I was lent the bike by a guy i worked with. It was better than anything i had and it already had full pannier bags mounted. he had used it on west coast bike trips but was now into riding across europe. He had new fold up bike that had a case to store the bike in when he hitchhiked or got on a train, or turned into a trailer while he was riding. He also used a hammock tent instead of the light weight coffin style tent i had. He said it was smaller lighter and didn’t require good ground conditions. He had his first europe ride schedule the same time as my ride so i got to use his awesome bike.

The second morning on my ride, i was riding the trial by the campground and a bike flew by me and turned around. He introduced himself as guy and had noticed my fully loaded bike. He said how happy he was to see kids doing this still ( i was 23 or 24). He told me when he was 18, he took a canoe trip with his father and uncle. they started in canada, went through the great lakes, down the mississippi, around the gulf and all the way through the amazon. They wrote a book about it called paddle down the amazon.

I ran into a guy painting mile markers on the road for his local bike club. they were training for the annual tour de iowa. we were trying to outrun a storm front up and down hills. we got to a little diner and waited it out. he said he couldn’t believe how i could do a trip like that. I explained i just do 60 miles a day. this is a guy who did 100-200 mile training rides several times a week, all summer long.

I also really enjoyed riding into cities like memphis and st. louis, throwing the bike in a hotel and take a day off to walk around, do laundry, sleep in a bed.

when i was making final preparations, i was trying to come up with a cause to attach to my ride but never got anything together. I had a good time meeting people along the way. i think it was very enjoyable to on my own for 3 weeks. You become very approachable when you are just 1 guy on a bike. i think it would have been different if i was in a group, it certainly would have complicated everything.

when i arrived to new orleans, i had 7 five-week old husky puppies waiting for me in my apartment. I had mated my dog with my upstairs neighbors husky before i left and had given her my apartment to take care of the puppies. I had only left a couch and a box of clothes (and my car). An empty apartment is much easier to clean up puppy mess. the dogs were all claimed by our friends, so when the got their first shots, i gave 6 of them to new owners, took my puppy and drove back up the river.

anyway, i just wanted to wish you luck. i think it is a very cool thing to do and even cooler that you are doing it as part of a move to new hampshire! i wish i could be there when you get there, i remember returning the bike and having a beer with my friend and talking about our rides we did half way around the world. not many other people understood it quite as well. Looking forward to meeting you in the future and let me know if i can help you out in anyway. 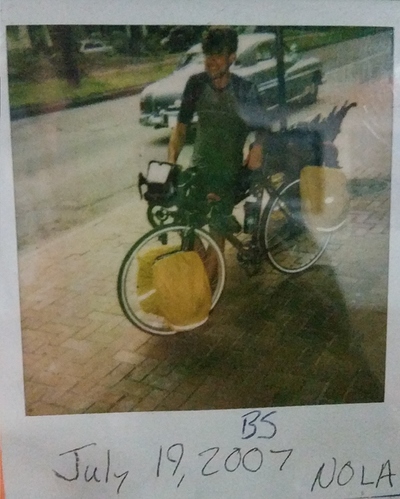 before I met Kat (and sped up my move) I was planning a ride to NH from Santa Monica Pier on my quadcycle. I was not going to do very many miles per day and I was going to stay in motels each night.

do we have a link to the guy who walked from Cannon Beach OR to NH?

I don’t think Will Anderson (then Will Buchanan) is on this forum. He’s still active here - I seem him at the state house a lot.

I’ll invite him here, though. Back when he moved, forums were it for communications with activists.

FYI, Dunker is in NC today, near Raleigh.