" We are holding a rally in advance of the hearing on New Hampshire Independence. The rally will be on Thursday January 20th starting at 2PM. The hearing will follow inside the legislative building at 3:30PM. The address is 33 N State St, Concord, NH. The room of the hearing is 302-304." *

So my understanding is this demonstration will be right behind the state house aka right in front of the Legislative Office Building. The legislation is called CACR 32; going before the state-Federal relations committee. This is to be their first public hearing, focused on listening to the public. It’s arguably your first chance to actually strike at the root of your problems…Federal rule over NH. There will be attempts to make it your last chance.

The committee will eventually be deciding whether to recommend that the people be allowed to vote in a referendum on NH Independence. More details to follow, I’ll begin promoting this demonstration and inviting people shortly.

The hearing is likely to be continued at a future date…if there is not time to hear all the testimony. If they want to suppress turnout, then they would probably continue it to the following day so be on the lookout for something happening Jan 21 as well. Unpredictable tricks have been… predicted. However thus far all the state house folks I’m aware of have handled this in an open-handed manner. When Texas folks tried this type of legislation they never even made it to a committee hearing.

Here’s a pic of the Feds torturing an Iraqi prisoner: , might be useful on a sign … “Pro-Fed = Pro-Torture” During the early stages of the Iraq War, members of the United States Army and the CIA committed a series of human rights violations and war crimes against detainees in the Abu Ghraib prison in Iraq, including physical and sexual abuse, torture, rape, sodomy, and the killing of Manadel al-Jamadi. The abuses came to public attention with the publication of photographs of the abuse by CBS News in April 2004. The incidents caused shock and outrage, receiving widespread condemnation withi The Geor...

Or one could do what the successful OTPOR activists did in Serbia. They bought a barrel and a baseball bat… the barrel said “collecting money for Slobodan Milosevic’s retirment” and “if you don’t have enough money because of Slobodan Milosevic…just bang the barrel!” This was a hit with passersby…it created demonstrators out of random people. later the police seized the barrel, the activists photographed it and ran a story in their paper called “police arrest barrell.”

I guess if it were me I would substitute the word “Federal government” for slobodan milosevic.

John Connell used to do "US out of NH, NH out of US"
Any better ideas?

I know Alu is planning on hosting a party at his place beforehand, but I think I would just try to get to Concord really early.

Thanks guys! Emailed this to about 150 friendly NH email addies, though probably half will bounce:

" 2pm Thursday Jan 20 right behind the State House in Concord: Help bring NH closer to becoming a nation free of DC, its torture chambers and vaccine mandates. Historic public hearing follows in front of House committee. Legislation to let the public vote on our independence!

Requesting your help spreading the word and your presence at the 2p demonstration if possible. We’re not going to stop DC by hacking at the branches; this is our peaceable strike at the root. It’s the Hail Mary Pass that Doesn’t Have to be Caught. Look how many concessions Scotland and Quebec have wrung from their central governments…with “failed” independence drives!

I think messaging along the lines of “We

the American people – the U.S. federal government, not so much” could be useful.

Perhaps “Make NH a sanctuary country for those fleeing the U.S. and looking for a culturally familiar place without the authoritarianism”? Or something to that effect; I realize shorter slogans are usually best for protest signs.

This may be beyond the artistic capacities of such a rally at this time, but I think a giant octopus constructed out of paper-maché or other materials and labeled “The Feds” or something, with its tentacles wrapped around a number of people dressed as “states” (wearing cardboard in the shapes of New York, California, Florida, etc.), while one person dressed as New Hampshire runs around free without any tentacle, could be an effective visual.

Were the Crypto6 in court? Any news from that?

I thought I deleted this… Idk…

you do realize that any outdoor demonstration on 1/20 is subject to wind chills in the -20s ?

1/20 Forecast as of today says it will be about 28 degrees with 9 mph wind and partly cloudy skies, for what that’s worth. Someone says they’re bringing copies of an NH national anthem to sing! Written by Governor Thompson some decades ago.

The Telegram NHexit groups are seeing over 100 messages per day right now… Someone there has announced they will be present tarot cards in hand to conduct a “ritual” at 2:22pm…purifying NH of Federal influence or something along those lines lol . Other activists will be singing the unofficial NH national anthem written by late governor Thompson…and distributing NH flags. 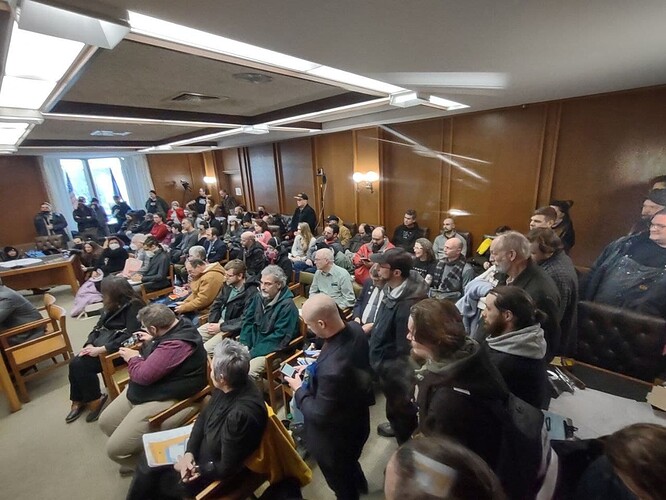 NH Independence advocates made up most of the attendees at a House hearing on legislation which would let NH residents vote to become our own nation.
“We packed the state house” - Chris Wade from Keene 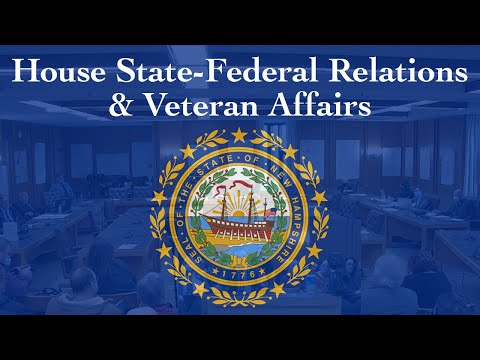 Above is full audio-video of all the committee’s hearings Jan 20. You’d skip forward to roughly 7 hours in., where the discussion of CACR 32 begins.

" This has been VERY interesting… wheels are turning in my head " - Rep. Moffet (sp?) on the committee, reacting to hearing testimony

The image I’m seeing from the youtube feed shows roughly 10 committee members present … there are 20 total cmte members I think. Anyone know more?

Someone apparently made the argument before the cmte. that DC would not wage war against us if we tried to become independent… this is unwise to claim; anything overly rosy is unwise to claim. It is the fact that they do threaten us…which makes divorce the right thing to do. 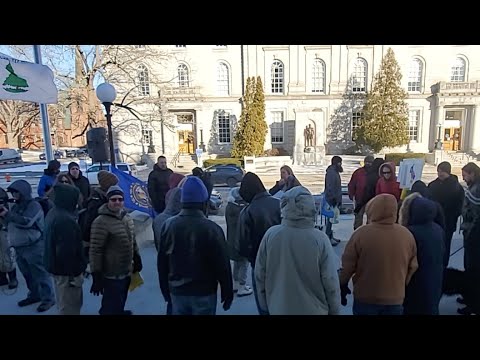 (Above) Roughly 75 NH Independence supporters rally before the hearing on CACR 32.

Who has more interesting details and media to share with us?

Chris Wade of Keene estimates turnout at 80 people for the hearing not including the committee itself…nearly all supporting the Independence legislation. Standing room only, hearing went on for 3 hours and they considered moving it to the big auditorium / reps hall thingie.
someone else estimates there were just 4 people speaking against the people’s right to vote on independence. Cmte. chair Al Baldasaro did pretty charming job moderating the meeting but perhaps wasn’t entirely fair to our faction. During testimony, one pro-DC politician got over 20 minutes (because Baldasaro had asked him to research Constitutionality). But Baldasaro scolded members of the public for going over 5 minutes. From listening to the whole hearing, it looks like about 5 people spoke against the legislation , about 25 spoke in favor. All but one of the opponents…were state reps and were allowed to go first. Baldasaro himself announced during the hearing that he is “on the fence.” Committee Clerk Susan DeLemus gave an almost fiery speech at the end of the hearing which is a little hard to hear but was lavishing praise on the Independence crowd and reminding the world of the suffering which DC has inflicted on her political-prisoner husband related to his presence at the Bundy standoffs.

A Vietnamese-American lady spoke, with a moderate accent indicating she probably grew up in IndoChina. She said she was in the building for something else and was against Independence when she entered the room but quickly had her mind changed by the testimony. She said something like “America is China” and invoked the 1772 Pine Tree Riot as a reminder that if we led the continent to more freedom then, we can do it now.

The one non-government guy who spoke against the bill seemed very effective , said he had been a homeless person in the past and got the brunt of all that’s wrong with the U.S…but still thinks it is worth fighting to save. If anyone knows who he is, I’d like to invite him to our weekly e-meeting so he can make his case directly to us at greater length.

This is unusual turnout for tiny New Hampshire; nearly all attending were in favor of ending Federal rule over the state. If passed as originally written, CACR 32 would let all NH citizens vote on whether to remain in the Union and is thought to be the first time a state government has gone this far in that direction since the 19th century.

They have voted on the bill today but did not try to amend it first. However the vote was 21-0 against recommending it.

Penguin is right, this is still a victory , and we’re still doing twice as well as I would have predicted in Sept. They voted on the legislation as written rather than turning it into something else; they’re presumably letting it go to the full house intact and its treatment in the hearing was actually pretty respectful. Nothing definitely underhanded or violent/prosecutorial has happened to our people yet , I would have expected 3 or 4 such abuses by now. It’s now running wild in the press and on the net and will go wilder when if/when it hits the full House. The authoritarians are crapping pyramids over it. We’ll have setbacks later, but this isn’t one of them. Where else in the U.S. has anything remotely like this happened since the 1800s?

I didn’t suggest wearing only cardboard. Cardboard in the shape of different states can potentially be affixed to the outside of whatever jackets or winter wear people deem appropriate to have on.