And you did a good job filming it. Meanwhile…activists have set up a website where folks can send crypto and probably other types of donations meant to help the arrested folks:
TheCrypto6.com

There’s not much good one can say about the FBI’s raid on the LRN.FM studio that occurred a week and a half ago now, but there is one great thing that has come from it all. Thanks to the FBI’…

According to “Mr. Penguin” in the above article on FreeKeene.com,
authorities raided “19 properties over the supposed use of cryptocurrency”

Is he saying 19 properties in New Hampshire were raided on March 16? or is he including something outside that time and place? Can anyone name all 19 of the properties raided and post contact information for them? 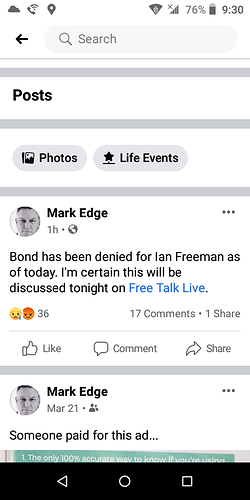 Ian Freeman called me from jail yesterday, and I was able to interview him with an audio recorder…making it his first broadcast from behind the wire.

I don’t recall where the 19 properties # comes from exactly, but it was reported in one of a few places. I’m 99.5% confident it was 19 warrants that was brought up. I should probably point out that it may not be 19 properties, but 19 warrants too, so it’s possible that they searched vehicles and needed a warrant, or something similar too. Either it was during a hearing (probably the one for Ian Freeman for those who were watching that) and/or it was in a decision handed down for Ian Freeman. I believe that is where that # came from. We don’t know what the 19 properties that got searched were and they don’t seem willing to tell us. We do have some idea of the properties searched however. So, for instance all the places that had a vending machine got searched. Homes of at least one person working for the Shire Free Church got searched. I’ll resist naming names even though I know many of you will know who it was that had a less than prominent job. Then both the Leverett St addresses, the Mighty Moose Mart, the Bitcoin Embassy, the house next to it, and two more homes were searched of people arrested. 3-4 or vending machine locations (CampusCo in Keene was one of them). I can think of 8 or 9 properties that were searched. There may have been searches of a property that no longer had a vending machine on the day of the search (the Thirsty Owl, and it is possible that they had a warrant for Lucky 7 Bar & Grille by association as the same guy runs a bar at that address, but I didn’t hear anything from the bar the day of the raid or day after actually when I went in, so I don’t know for sure), but the machine got moved just prior to the raids, but I can’t confirm that was one of the claimed 19 properties that they had warrants for. Anyway- yea- it’s a question that has been brought up before. What were the 9 or 10 places searched that we haven’t identified? We just don’t know at this time.

5 more demonstrations now tentatively scheduled around the state to protest these raids. Weekend of April 9. I need help spreading the word; running out of facebook invites.

I can help promote it, but there were some things you might want to adjust before I take the leap and start telling people about the dates, times, and locations. See other thread about that.

the bail appeal hearing is imminent. anyone know more or have info on how it can be viewed?

Sponsor: http://Government-Scam.com - Was it intergenerational organized crime from the start? This protest ocurred approx Apr 4, 2021. Want to contact Ridley? Go to http://YouTube.com/RidleyReport...

Sponsor: http://FreeKeene.com - Move to NH and join the libertarian truggle! Want to contact Ridley? Go to http://YouTube.com/RidleyReport then click "About" Music on this channel is generally from my brilliant bro: http://StephenRidley.com … Cops "arrested" me 3 times without arresting me, says Wade

Sponsor: http://FreeKeene.com - Move to NH and join the libertarian struggle for real freedom! Want to contact Ridley? Go to http://YouTube.com/RidleyReport then click "About" Cops "arrested" me ...

Sponsor: http://FreeKeene.com - Move to NH and join the libertarian struggle for real freedom! Want to contact Ridley? Go to http://YouTube.com/RidleyReport then click "About" Learn about the big F...

USPS was involved in the case, its enforcement wing participated n the investigation. Here is the demonstration at their big facility in Manch Please post info and updates here regarding contact information for our people in jail, and let us know how well your mail is getting through. Maybe also what you are sending. Lets get 'em some mail to make their lives more entertaining and send a message to their imprisoners that they are important. Contact me via ridleyreport at live period com … if you need me to post something here for you. This is what I have as of 3/27/2021: Ian Freeman (Formerly known as Ian Bernard) 314 Daniel Web…

Mail-to-Jail May Be Dead, But Activism Is Alive And Well In New Hampshire:...

First of all, if you haven’t seen the raid videos from March 16th, 2021 where the FBI raided the Liberty Radio Network studio, Free Talk Live, the Bitcoin Embassy, & the Mighty Moose Mart…