Free Stater Calls for the End of the LPNH

“LPNH is quite possibly the biggest threat to FSP achieving its goals. Intentions don’t matter, results do, and LPNH is convincing a lot of potentially excellent legislators to run unwinnable races.”

“Seriously. Now that Free Keene is all but decimated, perhaps elimination of LPNH is the next milestone.”

The above two quotes are from free stater Denis Goddard.

It’s smug bullshit like this that makes me want to run for state rep as a Libertarian.

One has to wonder why Denis has vehemently opposed and has actively tried to kill any effort related to the FSP that starts to gain any kind of viable traction. Free Town Project, Free Keene, now the LPNH. Hmm.

This is a badge of honor for the LPNH. Sounds like they are doing things right if Denis is mad.

He’ll never speak word like this to your face though. lol

State rep sounds like a good plan, @ShireDude - build on your current campaign for alderman. How’s that going, by the way? Any media reached out to you for interview? Organizations sending questionnaires?

Have you considered running with “Shire Dude” as your nickname? The rule in Keene is that if you’ve had a certain nickname publicly for a certain number of years that you can include it with your name on the ballot, like:

Oh, and fuck Denis Goddard. He is a complete shill for big Republican.

I’m proud to be in the LPNH and running my “un-winnable” race for governor as a Libertarian.

Keene and its activists are gems that the FSP wish it were. Being bold and sticking to principles while showing alternatives are how you win people over.

If the Denis Goddards out there want to stop that then they do so at the pleasure of the state establishment.

I can see hating on the Free Town Project, even Free Keene.

Can’t understand wanting to destroy the LPNH when you claim to be liberty minded, though. Not at all. Unless you are, as suggested, working for an opposing mainstream political cause. Or something even more sinister.

Now he’s pulling a Cantwell going on about the jews. Isn’t Dennis just a bundle of sunshine today? 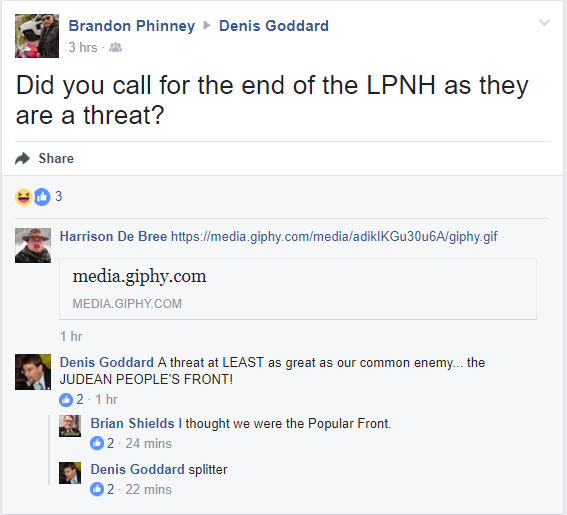 Well you see, if people join the LP and/or vote for LP candidates, they aren’t spinning their wheels trying to change the R & D party platforms (that no one reads). And if the LP retains ballot access, it will be easier for LP candidates to run for office, thus increasing the odds they’ll win; which could effect the influence of one of the two major parties… muh duopoly!

Oh, and fuck Denis Goddard. He is a complete shill for big Republican.

I believe he ran as democrat, just like you.

But I think Denis is right. If you want to win an election you run as a Democrat or Republican. It is a two party system. Run as a Libertarian if you want, but not if your goal is to get elected. Most Libertarians running for office know they have no chance to win, and they usually say so. They run “to get the message out”.

Eric Brakey of Maine is a good example of a successful “libertarian” that runs as a Republican. He came to Maine in 2012 to run the Ron Paul campaign, then the “Defense of Liberty” PAC.

Eric Brakey (born August 8, 1988) is an American politician in the U.S. state of Maine. Brakey was born in Cleveland, Ohio and grew up in the greater suburb of Shaker Heights, Ohio before attending Ohio University, where he studied theater performance. After college he moved to New York City and worked as a professional actor starring in one Coconut Water commerical. A supporter of Congressman Ron Paul, Brakey took a job on his 2012 presidential campaign and moved to Maine. Brakey was elected t...

I agree with that, but I totally understand why reps like Dyer and Justin for leaving the NHGOP. I don’t know personally about their experience but I’ve met plenty of angry old men in the party who hate anything or anyone new. They even hated Donald Trump for not being “conservative” enough for them. I almost changed my registration some of them got so hostile.

It’s hard to hold it against anyone that they have any complaint at all against Trump, least of all “not Conservative enough,” as “Conservative” is a loaded term.

It’s my understanding that I cannot use “Shire Dude” per an RSA (don’t remember the number), simply because the name can be construed to carry affiliation with political movement(s).

I’m running for selectman this time around. It’s a very small position in Manchester, doesn’t get media buzz.

In that case, you’d have to do a legal name change. I’d contribute to the cause if you wanted to. It’s not much over $100 to do in probate court. The court hearing was the quickest in my history. I’d barely turned on the camera before it was over.

good job on the part of the NHLP, making some hay over a political attack against them. i’m still skeptical about them but a lot less skeptical than 2 years ago. And less skeptical of them than of Denis…though I will hear him out. I’m going back to look in detail at his concerns.