A couple of weeks ago, hundreds of freedom-loving activists made headlines when they converged on a meeting of New Hampshire’s governor and the “executive council”. The purpose of the meeting was to discuss accepting $27 million taxpayer dollars from the federal gang to promote COVID vaccinations. Cowardly state employees walked out of the meeting claiming they were in fear for their safety and the lone democrat on the executive council called the activists’ behavior “insurrectionist”. Sununu canceled the meeting and it was rescheduled for this morning.

Again, hundreds of activists gathered this morning at a larger venue, the New Hampshire Technical Institute in Concord, for the rescheduled meeting to consider accepting the $27 million bribe. This time, the state gang was prepared for mass arrests with at least 50 state troopers on hand as well as multiple police prisoner transport vans. During today’s meeting, there were indeed several arrests, with activists facing “Disorderly Conduct” charges.

In New Hampshire, the executive council is a check on executive power. There are five councilors and any contracts valued over $10,000 must be approved by the council, which is why the $27 million offer from the federal goons has to get the nod from a majority of the executive council. Despite tyrant-king “governor” Chris Sununu advocating the council accept the COVID bribe money, surprisingly the council voted 4-1 down party lines to REJECT the money!

According to the Free State Project and democrat executive councilor Cinde Warmington, this historic vote makes New Hampshire the only state to reject federal COVID money. The authoritarian states of Florida and Texas both accepted the federal COVID bribes.

Sununu issued a whining press release after the meeting, saying, “today’s vote by members of my own party on the Executive Council was a total disservice to the constituents we serve…The vote showed a reckless disregard for the lives we are losing while they turn away the tools our state needs to fight and win this battle against COVID.”

Meanwhile, dozens of activists visited the Merrimack County Spiritual Retreat where the nine people arrested were processed and released. I spoke with Absolute Defiance founder Frank “Footloose” Staples about the arrests. He says they were charged with the police favorite catch-all, “Disorderly Conduct” and one caught a “Resisting Arrest” charge. One of the arrested is a 70-year old woman.

When asked about the rumor that he was arrested on a warrant from the PRIOR meeting, Footloose said he isn’t sure as despite the fact that he was arrested, processed, and released from jail, at no point was he issued a “COMPLAINT” with any details regarding his charge. Prior to his arrest and the arrest of another leader, nurse Terese Grinnell, neither were asked to leave or warned in any way.

Footloose also explained that the meeting room had a large plastic curtain dividing it and behind the curtain were dozens of state troopers – presumably waiting to make arrests. So, by dividing up the room into an area for the audience and an area for potential mass arrests, the gang was able to keep a large chunk of activists from entering the building. Very sneaky.

Regardless, the executive councilors got the message from the people and they did the right thing and rejected the federal bribe, an act of nullification – proving again that New Hampshire is a special place where freedom actually has a chance to win.

Great post! It’s good to see some less biased or at least more correctly phrased and honest reporting on the protests and activism in New Hampshire. The enemy is really good at slanting the story and the statist reporters literally cater to them accepting their lies at face value without ever getting the other sides perspective and then twisting whatever they do report if they do provide quotes from the opposing side.

Independence Amendment now has a more official designation: “CACR 2022-2243” and 8 state reps have added their names as co-sponsors…making a total of 9 sponsors. Maximum allowed is 10. " 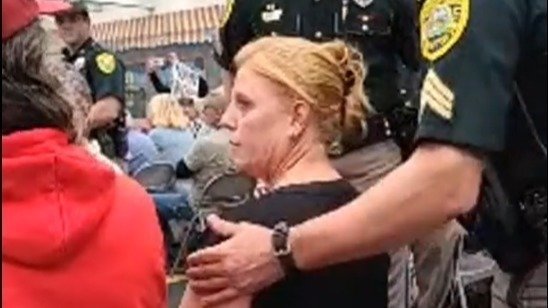