It's official - the NHexit bill number is CACR 32

Details here, including how to contact the committee hearing the bill:

It’s time to break up, peacefully. It took a few months, but the proposed constitutional amendment for New Hampshire to declare independence from the United States, submitted for 2022 by seve…

posted this to telegram:

NHexit needs you to contact the State-Federal relations committee in favor of our proposed referendum on Independence! 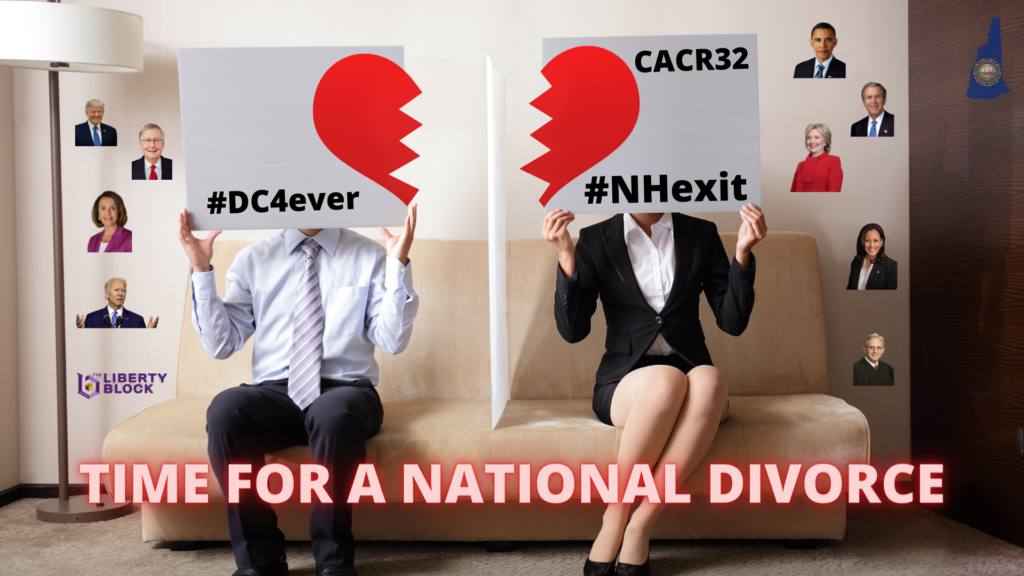 On Tuesday, the legislation that would place state independence on the ballot for the voters was given a number and assigned a committee. The legislation will henceforth be known as 'CACR 32', and its first stop will be in the 'State-Federal...

Please back CACR 32 as I do, and don’t let it be turned into something else. This is about the right of the people to vote, within strict Constitutional constraints, on an issue of great legitimacy, timeliness and importance. Washington should never be allowed to create another political prisoner or “shortage mandate” in New Hampshire.

This LTE lays out the case as well as I’m able in that format but fails to list even one percent of the major grievances. Contact me with questions or ideas if you wish: (number)

Dear editors at the Sentinel:

This is a response to your editorial against the New Hampshire Independence Amendment, which - if passed - would let all NH citizens vote in a referendum on whether we continue to be ruled by Washington. Why do you think this issue should be decided by dead war criminals rather than your neighbors, arguably acting within the rules laid out in the U.S. Constitution? Though silent on independence, it reads: “The powers not delegated to the United States by the Constitution, nor prohibited by it to the States, are reserved to the States respectively, or to the people.” Well here we are, trying to peaceably exercise these powers through the state house, then the polls…what’s there to be against other than D.C. and its enablers in the press?

Grrr…sorry to get so blunt…the Sentinel seems one of the few papers that still has some independence and frontpage/editorial separation. You deserve respect for the fact that I can say this without likelihood you will suppress the letter. But ultimately it’s questionable when a proposed vote on “who should govern where” is treated as Forbidden and Shocking…but starting five wars since 2011 is just business as usual. Write your congressman; vote for a different chickenhawk. Don’t color outside the lines, don’t imitate the successful Estonian or Gandhian independence drives.

The Washington empire, like Moscow and London before it…has made independence look good by abusing the people who live under its domination. It has turned most New Hampshirites against the central government, which has an approval rating hovering somewhere between that of syphilis and leprosy. But an informal September poll by the state’s largest paper showed support for the Independence Amendment at 71%.

If D.C. didn’t want an independence drive in New Hampshire, it wouldn’t have shut down four square blocks of residential Keene to put a drone through the window of America’s #25 talk show. It would not have exacerbated shortages by demanding most New Hampshirites submit to medical experimentation as a condition of employment. It would not have used our tax dollars to run a TORTURE CHAMBER at Bagram Air Base in Afghanistan.

Google these FedCrimes, and explain to us again why you think rule by Washington is more desirable than rule by Concord.

anyone else see a problem with this part of the wording:

" VI. That if the proposed amendment is approved by 2/3 of those voting on the amendment, it becomes effective when the governor proclaims its adoption. "

Great letter Dave. I sent the legislative committee a short letter, but yours to the Sentinel is a lot better. And yeah, the governor having the ability to stop independence simply by failling to act after the vote passes is not good! That needs to be fixed. It should go into effect automatically if the governor hasn’t announced it within a specific time frame or something.

I just emailed the committee the following:

Coming before your committee in 2022 will be CACR 32, a historic opportunity to allow the people of New Hampshire to vote on whether or not to stay with the United States.

I do not want to try to convince you of why NH independence is a good idea. If you agree, then great, however if you are unsure or you are against independence for NH, you should still support CACR 32.

Ultimately the decision to stay or go should rest with the people of New Hampshire and that’s all that CACR 32 does - it would put it to a vote. So please put whatever opinions you may have about independence aside and support the right of the people to determine their future. Please vote OTP on CACR 32 without any amendment.

I host a nationally syndicated talk radio program from here in New Hampshire with over 185 radio affiliates coast-to-coast. We are watching this historic legislation very closely and hope to report that NH’s state reps support the democratic process and pass CACR 32.

Thank you for your time and consideration on this historic matter,
Ian Freeman
Host, “Free Talk Live”

Sent customized versions of this to the Dems on the cmte. None of the Dems have responded yet:

’ Ms. Massimilla: I’m for NH Independence; are you with me?

Rep. Massimilla: Washington has been starting a war roughly every four years for the last half-century. Will you be supporting DC and its torture chambers…or the relatively peaceable state of New Hampshire during the coming committee vote on CACR 32? Do you have a suggested third path to peace that is better than Letting the People Vote on NH nationhood?

This is arguably the Hail Mary pass that does not have to be caught…just throwing it pushes back against DC’s cruelty more effectively than a hundred typical bills could. Are you willing to throw it?

Sent customized versions of this to the GOP members of the cmte… two have responded…one at length… I’ve uploaded the exchange on a different thread.

’ Rep. Lundgren: Will you be supporting CACR 32 and its proposal for a referendum on NH nationhood? Would you like me to publicize your position?

“UPDATE: The public hearing will be on Thursday January 20th at 3:00pm at the Legislative Office Building (the building behind the state house). If enough people attend, the committee will be forced to move the hearing to representatives hall in the state house.” 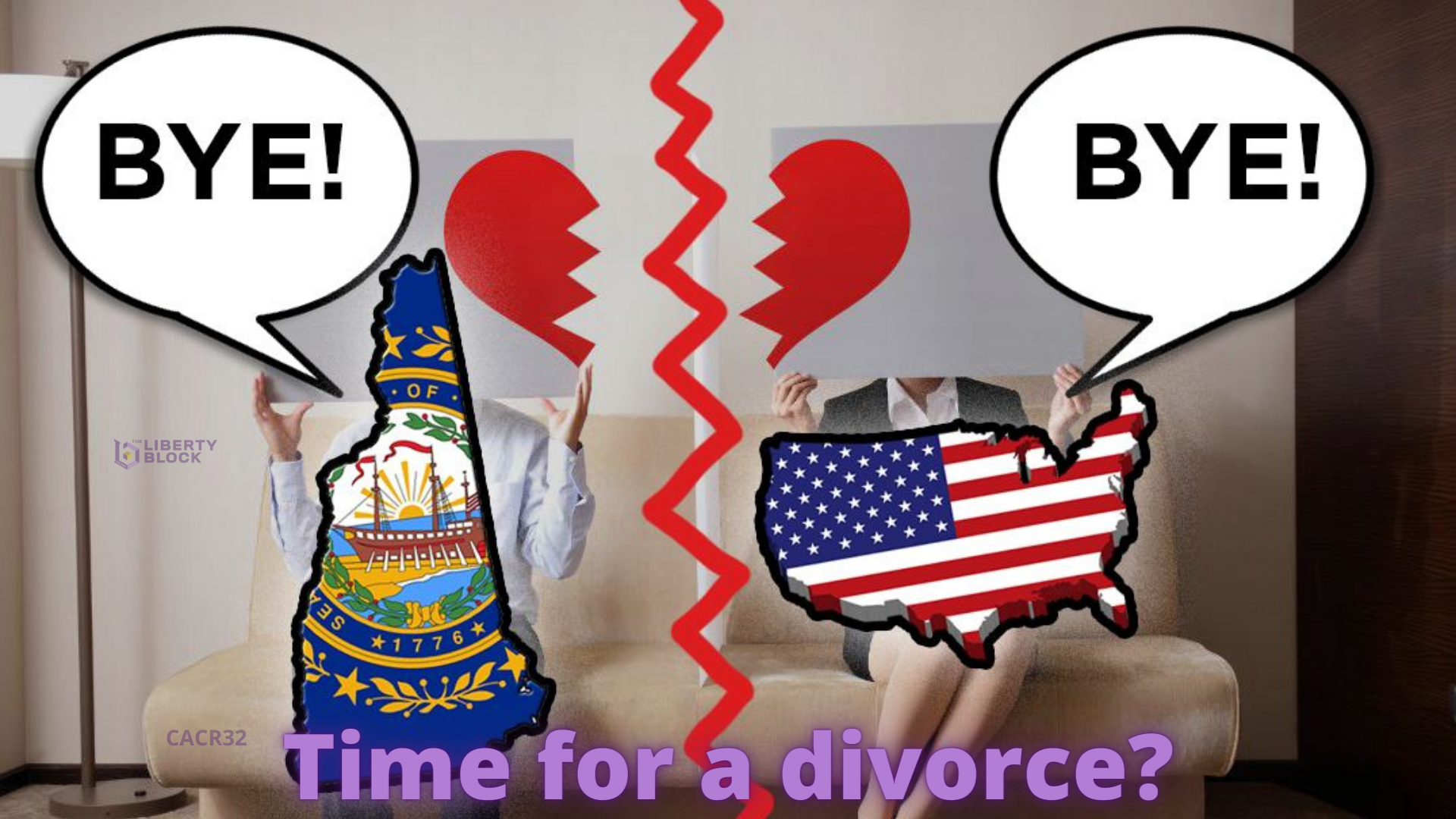 On Tuesday, the legislation that would place state independence on the ballot for the voters was given a number and assigned a committee. The legislation will henceforth be known as 'CACR 32', and its first stop will be in the 'State-Federal...

Anyone know of a user-friendly website (preferably one hosted by a freedom movement group) that lists the names and contact info for the relevant NH legislators (phone numbers and email)?

Are you looking for the legislators on the committee?

Here’s the list of them, including an email to allow you to email all of them at once.
http://gencourt.state.nh.us/house/committees/committeedetails.aspx?id=16